Our main human doesn’t spend too much time at home. Especially since we have two new members of the crew, she must work and study to make sure there is enough money in her accounts to pay for our vegies. Because Data and Worf are big eaters also, even I being amazed of how fast they switched on vegies and how much they can chew. But, this is not about how they eat around 300g of vegies each per day, but it’s about me and why I might be the next Napoleon Bonaparte of the world. Yeah, I’ll skip the “imprisonment on a small island” part, but I’ll still conquer the world. 😀

So, Spock already told you how busy our human female was on Monday evening. I was also utterly unhappy about being put aside for two hours, but I hope this mess will end at some point and I’ll get to train the new members of the gang. Anyway, I forgot why I was upset when the food landed in my cage: parsnips and carrot greens! I’m not very fond of the first one, but the carrot greens are very tasty and full in vitamin C. Eating took me a while and the human female must have been felt like sleeping already, so she came and started to pet me while I was chewing.

I’ve stopped for a second trying to decide if I should continue eating or stretching and spoiling myself. But it stuck me I could do both. So, I’ve “fluffied” my but in the sawdust and let her do her thing. I was wheeking with pleasure and chewing with the same amount of pleasure on the same time. And I realized I’m that close to Napoleon who could do three things on the same time… Exactly when I was being sorry for not finding a third stuff to do, I felt like pooping. And there I was: wheeking, pooping and eating on the same time. I’ve told you I’ll be the next Napoleaon!

By the way, this is my Napoleon pose: 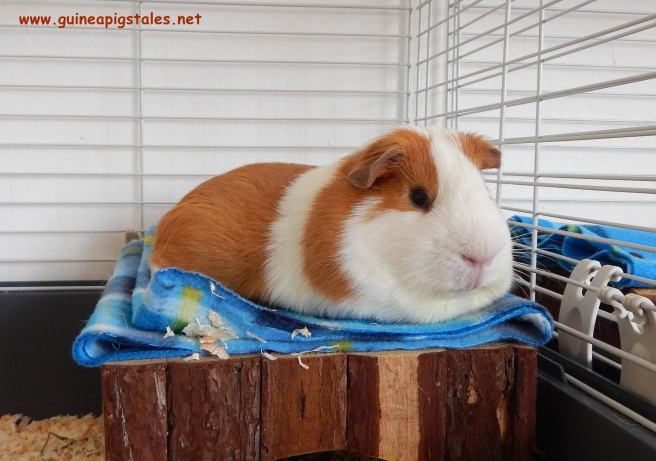