Our first Easter just passed. To be very honest, I wouldn’t have noticed if it weren’t for two strange things. First of all, the human female was off for work also on Monday (yesterday). This explains why we wrote nothing… I mean she restrained the laptop for the whole three days and we’ve got no chance to use it. Oh, and second: we’ve kind of had to pose with some dyed eggs.

On Sunday morning we had our little chit chat for planning the day and suddenly Kirk turned white (for Spock was not really evident…) and informed us he had a special mission for us. He explained it was Easter for humans, or at least for some of them, and they have some strange habits. Among them: posting photos with bunnies and dyed eggs on Facebook. No bunnies around, so some Guinea Pigs should do the trick!

Last year our human female asked Spock and Kirk to help her and be models for her photos, but they did not actually enjoy the process. So, an almost hysterical Kirk told us that it’ our turn to behave and sacrifice ourselves for some likes on Facebook. We saw them so confused and accepted to take the burden out of their shoulders. But I had no idea what I was agreeing for…  Also, I was almost convinced they were exaggerating.

But around 10 am the human female started some weird preparations: she brought a green towel and some dyed eggs and arranged everything on the couch. Then she lured us with some celery and made us to smile nicely for a photo with the eggs. (Kirk refused to stay still and Spock hid in the corner of his wood house.) Finally, after tens of photos, we were left in peace… True, we’ve got some funny ones!

Worf was more in to the celery than photo shooting, so the human female had to try a different approach. Up and behind…

I resisted for one nice photo…

… than I’ve decided it was time to explore. 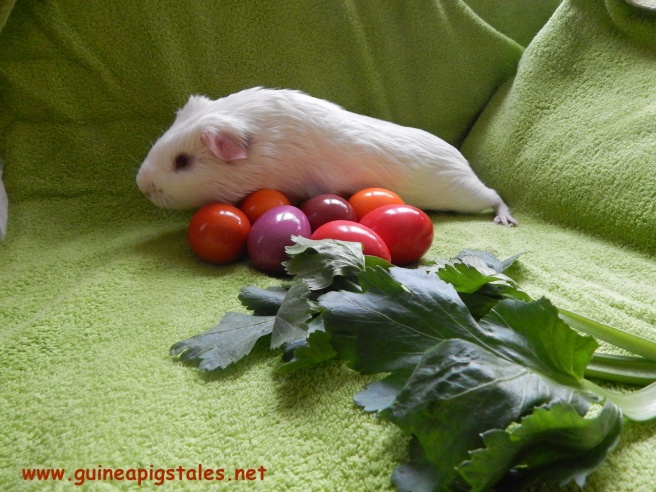 By the way, no eggs were harmed in the making of this pictures.

One thought on “Our first Easter”