At least this is what she keeps telling about me! And I really don’t see why she is so amazed by this. I mean, she has an equally proportional personality. I eat nicely my veggies, she has tastes and preferences. I go out only when she thinks it’s OK, she goes out all the time… So, I do have a personality that matches just fine my 1.2 kilos, but it’s not that huge. She has an enormous one compared with mine.

Anyhow, if we are talking about my personality, I might just tell you about my latest mischiefs. On Friday evening the humans had guests. They fried some meat on a bbq (what a barbarian habit), ate a lot of garlic and drank alcohol. By the way, one of them was Peruvian and we were really afraid he may confound us with food. So, all this people, her colleagues, to be more specific, arrived around 20:00 and at 1:00 next day were still in our home. And not in the bedroom, the room of our humans, but in the living room area listening to loud music and talking about a lot of nonsense. We couldn’t sleep…

At some point, her boss was sitting on the couch. I was so offended about their insensitiveness that I got out, climbed his lap, gave him the stink eye and went back with a very dignified attitude. I think he got the message because in half an hour they were gone. By the way, her boss is a nice guy, just that he doesn’t really understand why humans should have furry superior creatures in the house.

Saturday at noon everything restarted. This time with a lot of Romanians, their friends. Not that her colleagues are not her friends, just not all of them. And this time we were not afraid to get eaten, but we were scared sh** about being abused: apparently some of her friends think we are cute and they just want to take us and caress us. Which is fine up to a point, but they were more than 10. Anyway, I am always the luckiest: I run fast! So they don’t really get to put their hands on me.

One of the guests brought also a present for the baby-to-be-born. Our humans don’t really believe in not having things for the baby before the birth. But they couldn’t either keep their mouth shut before passing the first three months of pregnancy… Oh, I was talking about the present! Yeah, the baby got a cap, a body and a bib with very impressive messages. And I got the chance to check it first! I really took a good look and now we are debating if it’s suitable for the future biped. 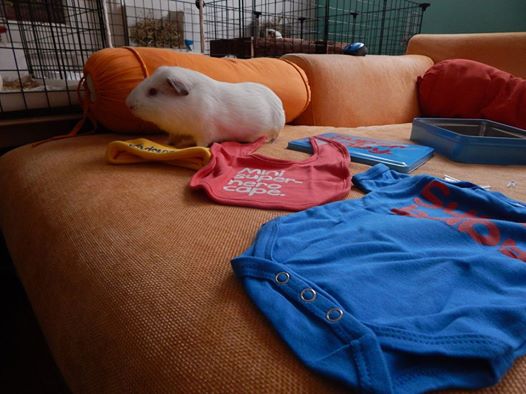 I don’t think I have such a difficult personality, after all… Yes, I’m impressive, but this is an amazing thing.