Really, our hf needs some therapy! Few days ago she checked my fur and stated I have again some lice. Not a bad case, but still… So, she decided I would need a bath with some fancy-crazy-all-natural shampoo.  And this knowing that I do not like baths. OK, she may have been right about the lice, but still! To give me a bath! She is just lucky that I am the smallest one!

So… Saturday morning, after cleaning my pen, she took me to the bathroom, put me in the sink and started to clean me. Of course I’ve tried to escape, but apparently I am not as crazy as Spock and instead of climbing up on her, I’ve tried to jump from the sink. Following this, she gave me some speech about how I should not attempt suicide. Oh, dear! That was the moment when I realized her brain was still sleeping… I mean what guinea pig would attempt something like this when has such an important mission of watching upon a human?!

Anyhow, after the bath she put me on the radiator in a pink towel under the supervision of the hm. What a disgrace! A pink towel! Thank all guinea pigs gods that the hm was passing me some pellets also and this made the pink towel bearable.

Finally, I’ve managed to get back to my room where there was no wood house to hide. But I’ve got a small paper bag with some hay in it. Very smart of the hf! Because I’ve tried to turn in that bag but it was almost impossible and the only outcome was that I got hay in my wet silky fur. Brilliant! And this is another proof that her neurons run away from her brain. Anyway, I kind of look cute in the bag.

When the wood house came back (it was also washed!), I demanded for two extra fleece blankets and prepared myself a nice nest. 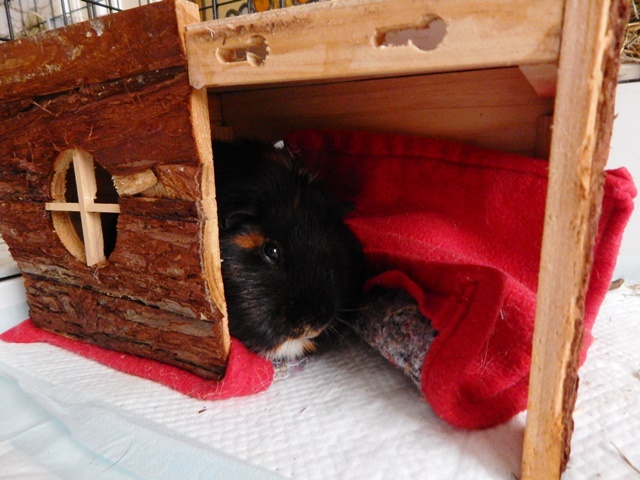 And I’ve punished the hf for this unbelievable gesture of bathing me! First I asked to be held and climbed in the hood of her anorak, so she had to spend about one hour wearing somehow her hood (inside) and holding it to create a proper space for me. I know it’s difficult to explain and unfortunately we have no photos: she was busy keeping me not to fall. Oh, and I forgot to mention that I was still wet and chose to nest on the back of her neck.

Few hours later, I asked again to be held and this time I felt asleep on her belly while supported by her right arm. So she had no chance to use that arm for an hour and a half and she had to type only with her left hand. All the other piggies were super amused and Kirk event thought he was revenged (he also got a bath the same morning).