Since yesterday, I lost contact with Worf. A big white and opaque fence grew between us. True, we never had a clear view to his room, but still we could touch noses and look over the fence to check what’s up. But yesterday all this changed.

Why?! Because Kirk and Worf moved in together. As Kirk and Spock don’t see eye to eye, the white opaque fence had to be put between us. To be honest, when Kirk and Spock see each other so close, they start chattering teeth and, as there is a fence between them and can’t get to each other troths, they just turn to the ones closer: me and Worf. So, the fence is to prevent us fighting, not them. I know, it’s a weird explanation, but it is the truth…

So, now Kirk and Worf are sharing a big C&C cage of 2×5. Bigger than ours, which is 2×4, but we have access to the couch. And we are naughty enough not to get upset from sharing stuff and just enjoy making fun of each other. Remember how we love stealing food from each other mouths? But let’s come back to Kirk and Worf…

We are talking about the jealous Kirk and the self-sufficient Worf. And they are both gourmands. Moreover, Kirk is that type who thinks that just because he is bigger, he can bully everyone else. Just that usually he gets out of the fight with scratches and bites. And Worf just loves to be left alone with his food. Then why paring them?! Because the humans believe they will be happier after all. Maybe they will even enjoy cuddling.

Since yesterday they are together. No fight, no biting, just the usual trials to show dominance. Also, Worf is somehow cornering Kirk and prevents him sometimes to get to the food. And now the humans are not afraid about real wounds, but about some psychological drama. Maybe a very sad Kirk… Because Worf looks like he would like to be more sociable wit Kirk. But, although I can’t see him, I hear some small normal noises from Kirk, so maybe everything will be fine after all. Anyhow, the hf is super attentive, refused to leave the house today and woke up several times over night to check on them.

This is how their new huge room looks like: 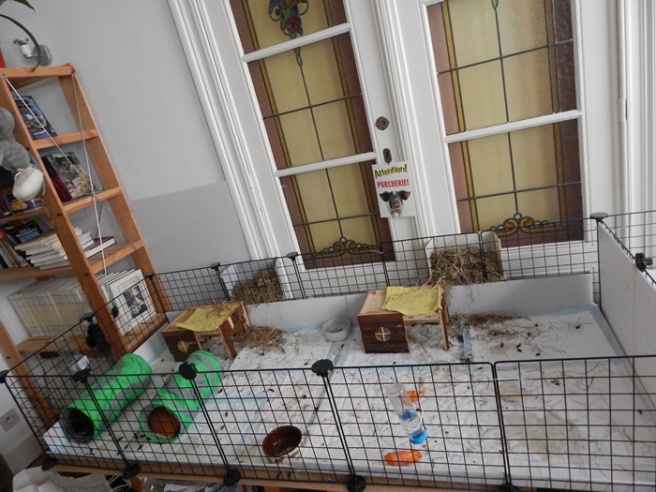 Maybe, in time, Kirk and Spock will be able to behave when they get closer and the white opaque fence will be removed from the grids. We will keep you posted.