As we said before humans are weird and need some days off sometimes. True, they need to work and provide us with fresh veggies, but this is not a good excuse. We also need to be cute every day but we don’t ask for days off… Anyway, as they are a different species and not a very efficient one, we allow our humans to take days off from time to time.
With our permission last week they went to Rome to visit some old and very old stones that at some point were some kind of temples and institutions important in the human history. I will not comment upon this. I would just say they still have a long way to get where we are: controlling other huge creatures only with the power of our minds.
So they went to Rome. But they had to find suitable replacements for the four days of their leave. Somehow they managed, although the other bipeds were not very thorough. We were not pleased, but it was acceptable. Especially that since their return we made them cuddle us more often. (Worf spent tonight half an hour in the hf’s arms.)
As the replacements were not very competent our humans had to leave clear instructions for them. And a nice stock of veggies. The veggies were eaten but we’ve managed to take a picture of the instructions. One list in English and one in Romanian. And still there were some mishaps… But we are fine. 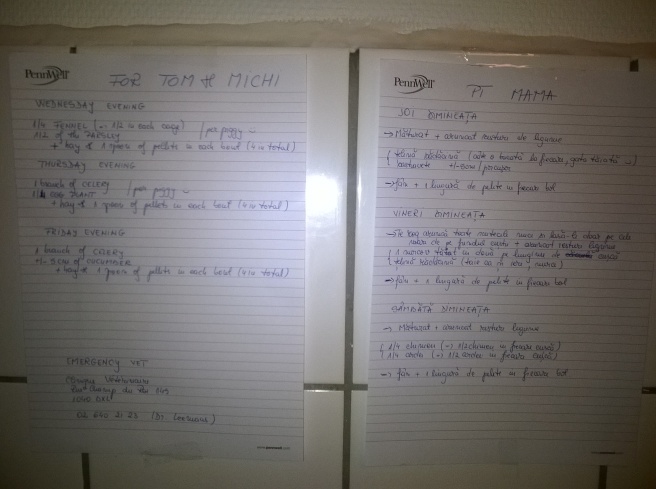