It took me a while to decide to write this one down. Especially that I am supposed to be the nicest one. And just because of that I was offered volunteer to be the social media manager and the spokepiggy of the group. But in this case I can’t be nice anymore…

We have a preferred supplier for our pellets, hay and puppy pads. It is zooplus.be. Until January this year we were super happy with them. The HF was ordering on line, using the ‘plastic money’, as one of our regretted friends used to say, and the orders were delivered from Belgium with DPD. Two days after the products were at our door. OK, at her office’s door, but that was close.

Since the beginning of this year, zooplus changed something. They are delivering in Belgium from Germany using DHL and TNT. As we order once per month, we’ve started noticing hiccups in the delivery process. It was never that bad, so we just accepted the facts. But this month everything went wrong and we ended up starving for two days. Like literally starving, not just as a figure of speech.

The HF placed an order on Friday, April 29th thinking that it will be delivered on Monday, May 2nd when the HM was at home. But it didn’t happened… Tuesday there was no parcel waiting for them when arriving home. Wednesday the HF was at home (when she was not out with the Little Human Brat), but no delivery either. At 5 p.m. on the DHL website it was still marked as ‘out for delivery’.

Thursday it was a Bank Holiday in Belgium so the HM checked again the website, curious where the parcel ended. Well, apparently they tried to deliver at 5:41 p.m., nobody was at home and they left a notice in the mail box. Just that Wednesday at that time everybody was at home. And there was no paper in the mail box!

Friday the HF checked again the website and the parcel was once again ‘out for delivery’. Just to be sure, she called the client service and she surprisingly found out that yes, it was out for delivery, but not to our address. The parcel had been sent to a collecting point. Luckily for all of us, it was just one block away. And by noon we had our supplies at home thanks to the HF who went to pick them up.

Now the problem is that our pellets were finished on Wednesday morning. On Wednesday evening, Thursday the whole day and Friday morning we had no pellets. I mean it! No pellets! This was horrible. And as we all thought we will be delivered on Wednesday by 6 p.m. nobody went to buy a bag from the supermarket. On Thursday they were all closed. We had to eat only fresh veggies and hay. And we love our pellets…

All I can say is that we need to re-evaluate this on line ordering thing. We really like zooplus, but we dislike DHL. Maybe we would motivate the HF to order one week in advance and to ask from the beginning the parcel to be delivered in the collecting point.

For now all I can say is that I wish to the DHL drivers to be left out of pellets for few days just to get to see what is like. (And please remember that I am the nice one! Just imagine what the others are thinking. Spock is already plotting a revenge.)

Our humans leave the house every week day in the morning saying they go to work because they need money to provide for us. I really don’t think that our groceries are that expensive, but let’s say that I believe their excuses. Still we were curious where does she work and what is she doing the whole day. So we came up with an ingenious plan to check on her, taking advantage of the fact that our vet is near her office.

First thing, one of us had to pretend being sick. I mean you don’t just go to the vet and pay € 40 to have a chit chat about the weather. As we are not at all good actors, we were just waiting for a minor thing to show up so we could make a big deal out of it and require a trip to the vet. I know, a little bit cruel from us, but we had to do it.

I was the chosen one. By the faith or by the all-mighty-guinea-pig-god-in-whom-I-do-not-believe. A small fatty lump grew on my back and I somehow had to pretend to stay still and let the HF find it. She was shocked and hyperventilating for a moment, but then all her good sense came back and she assessed it might be only a fatty lump. So let’s not panic, but let’s have an appointment with the vet.

The Z day was a rainy one (no surprise for Belgium!). The HM had the honour to transport me to the HF office and then I had the second part of the trip in her company. We’ve waited a little to the vet and this was a good opportunity to hear dogs barking and cats meowing. I am grateful we don’t have such companions in the house! Anyway, to calm me down, she took me out of my transport box and cuddled me for about 10 minutes. It was quite nice. At home I am too busy with Data, but there I had the time to let her do it…

Then the vet saw me and confirmed what I already knew: that I was a healthy boy and that lump was nothing to worry about. The HF paid and off we went to her office to wait for my private transporter to come and pick me.

While I was waiting, I was placed on the HF desk and she cuddled me more. She also introduced me to her colleagues and took photos of me sitting quietly on her desk. 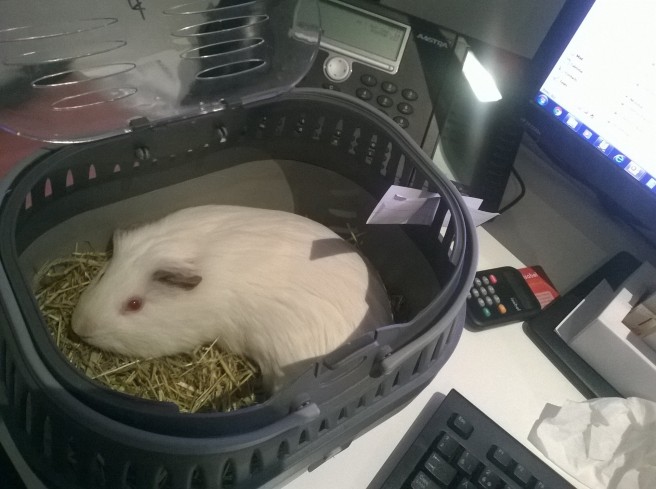 From my part, I had the opportunity to realise that she is not super busy at work so she should not complain of being tired at home! Moreover, I really believe there is something missing from her desk: some guinea pig poop. But I like that she has photos of us close to her. And her job seems boring, so I rather let her work and us to stay home and enjoy life.

Have you ever visited your humans at work?