When we got Archy, the previous owner also donated everything he had for him. Food, pen, wood house… But also two objects that Ms M asked Little M to throw to the bin as soon as they arrived home.

First was a hay-ball with a bell. Why not using one? For two main reasons: 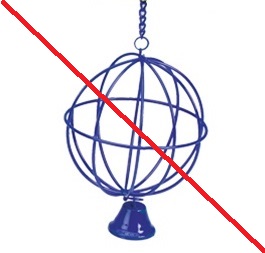 As a side note, whenever one of the humans rings some keys around Archy’s pen, he runs and hides.

Second thing was a harness (leash). Somehow the previous owner expected a guinea pig to quietly walk along on the street.

Reasons why not to use a harness on your piggy:

Be wise when buying things for your piggies! 😉