Kirk is back home. Not cleared, but stable and not in need for oxygen therapy. So all the other medicines can be given at home.

After three days of being the king of the pen, Archy seemed a little bit disturbed by Kirk’s return. Kirk didn’t take it well neither, so they picked a fight. Not the usual rumbling and teeth chattering, but really some biting and Kirk ended up with some scratches on his nose.

The logical thing to do was to separate them. Kirk is still under treatment and avoiding supplementary stress should be a priority. Of course, from the logistic point of view, this separation caused a mess.

The grids were used to build a shelf. Now the shelf had to be dismantled in a hurry (kids were demanding attention too). The VetBed was placed in such way that they both sleep on it, but is not large enough to cover the full cage. So it had to be moved. And redecorating was necessary too. 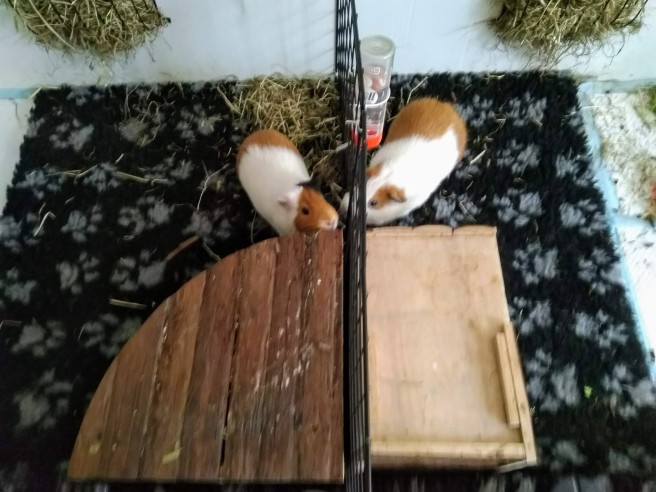 On the other hand, Spock was out of the house for less than nine hours. When he got back, both Data and him were so happy for the reunion that they hid in the same little wood house and just enjoyed the closeness.

Now we just hope Kirk and Archy will accept once again to share the same cage.