Ms M broke all the written and unwritten laws of binding two guinea pigs males. She followed her gut and apparently it works.

Kirk and Archy were out on the couch for few times and they didn’t seem impressed one to each other. They were on the couch, passing by, but not really doing something together.

Wednesday afternoon Ms M decided to open the fence between the two of them and see what happens. The main thing she skipped (and please don’t do this at home!) was cleaning the cages and making sure the odors are neutral. But the boys didn’t seem to mind this.

She had two main concerns: how the boys will react at being together and how the white ones (Spock & Data) will react to meeting Archy at the fence. Spock can be very nasty with Data if something bothers him at the fence.

Well, everything went pretty well. A little bit of teeth chattering, but no biting, no fighting.

Still Ms M hadn’t had the guts to leave them like this over the night, so the fence was back late in the evening.

Fortunately, the other adult biped was at home on Thursday and Friday and the fence was up again, this time for the night too. The boys are fine together, although we do not see any huge friendship there. But tolerance is acceptable if this gives them a bigger space.

Archy is still getting scared of the movement around him, but less and less and being with Kirk seems to diminish it. So far s good!

And Ms M is happy she can take nice photos of both of them. 😀 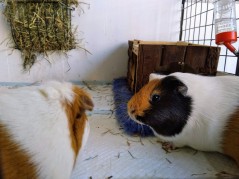 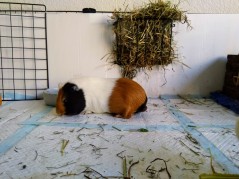 Saturday it was a big day in the house: Archy moved in the main pen with the others.

Ms M decided it was time to have the full gang in the middle of the house and, as Archy seems to be in good physical health, he was moved in the living room. Ho got the ancien spot of Kirk, Kirk moved where Worf used to live and the white boys are still where they like it best.

The point was to have Kirk and Archy one next to each other so they could get friendly. And not to have Archy next to Spock, as the last one is a little bit sensitive (please read “crazy”). Also, another goal is to use Archy with living with two toddlers and two adults.

So, Archy got The Spot! The corner pen from where he can watch the house. The down side is that everyone passes by to get to the kitchen or to come to the living room. So he runs and hide every single time. But he seems more and more relaxed, although there is a long way ahead before he will get used with all the movement in the house.

Kirk was a little bit vexed by the fact that his pen went smaller again, but happy to finally meet Archy in person. And, incredibly, he seems calmer and less jealous.

In three days there was no teeth chattering! Just sniffing and a great desire from Archy’s part to chew the grid and get to Kirk. 😀 The two boys are event chit chatting at the fence. And they eat together.

The plan is to wait few more days and then to start taking them out together in a neutral space. Under supervision, of course. The human are also waiting for Kirk’s sutures to resorb in order to avoid accidents. 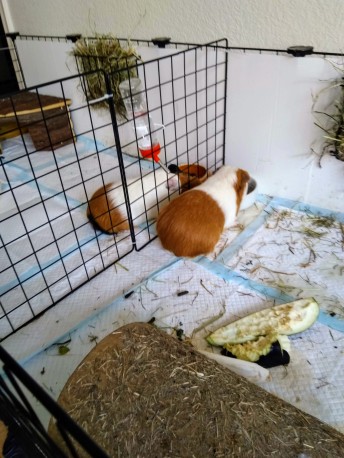