Until recently Ms M was pretty sure she was doing a super job taking care of the piggies. Since all the health issues started, she changed her opinion. And this is what she learned.

First, even if the way you take care of your piggy is fine for a young age, in the long run it may not be enough. To be more specific, she was sure the healthy and balanced diet was enough to cover for the vitamin C. Just that it wasn’t on the long term.

While they were young it was sufficient, but vitamine C deficiency installed quietly and at 5 years old the signs are becoming visible. For Data they become visible at about 4 years old and translated in dental problems like cracked teeth. Kirk has his joints consistency modified forever and it is not confortable anymore to jump up and down on his wood house. Idem for Spock.

So, our conclusion is that although veggies are good, the normal supermarket veggies don’t have enough vitamins anymore. But neither too much unhealthy pesticides or other substances – the small and frail piggies don’t seem to get sick due to chemicals. So safe even for human consumption, but not enough.

Second, and probably the most important: when your vet shrugges his/her shoulders and the only explanation to teeth issues or weird behavior or URI is “they are small animals, it happens and they die”, find another one. Fast! Or you may be left with big regrets.

Third. Even if a piggy never needed a vet until 5 years old, that doesn’t mean he will never need one. So always be prepared. We discovered a mammary tumor when Kirk was almost 5,5. And two months after he got pneumonia.

Fourth. Each piggy is different and they react differently to the same disease. Worf stopped eating when he had pneumonia and we could see he was not happy. Kirk never stopped eating, only at a later stage as a side effect of the anti inflammatory medication.

Also, they react differently to the same medication. No other piggy lost his appetite from Meloxidil, Kirk did. Big time. And lasted few days after we stopped the treatment.

To boost the appetite of a sick piggy and for a healthy, natural probiotic prepare a hay infusion and feed him the liquid by syringe or put it in his water bottle.

Fifth. Carrots, apples and other sweet treats are treats and not daily food, no matter how much your piggy likes them. Kirk started to have white spots on the eyes and they seem to be the effect of too much sugary food. (Their dry food has no sugar added.)

Sixth. Timothy hay all over! And over again. I know the Oxbow one is expensive, but there are some other cheaper options. In the long run, it will help prevent dental issues when the piggies get older. And it helps even if you pass to it later. It is about the fiber quality.

And seventh. When you have more piggies that get older at the same time, at some point you’ll have the feeling that there is always at least one sick piggy in the house. Top up two small children, and the feeling is doubled.

We hope this helps. 🙂

Kirk seems to be doing fine. Breathing normally, taking his meds. Some loss of appetite, but apparently normal due to the antibiotic and anti inflammatory meds. Nothing to panic, he still eats and poops.

Ms M is looking at the last photo she took of Worf few days before he died. And she is struggling not to cry. Somehow that Saturday end January when she took Worf to the animal clinic she had a feeling he would not come back.

He came back though. He wanted to fight, but he relapsed. And unfortunately the vet that should have taken care of him considered he is not worth fighting. She couldn’t even say if it was pneumonia or a tumor.

The humans still blame themselves for giving in to tiredness due to dealing with two small kids and accepting an easy solution for the vet. They believe they should have followed all their warning signs and find a second vet faster. It was not done, Worf died.

Actually, when it was done, after almost two months of struggle, he was to weak to keep fighting.

Of course the (not so) cavy savy vet that actually had no idea how to put a diagnostic, nor to treat pneumonia had it’s share in this tragic happening. But the main responsibility is on the humans’ shoulders. Or at least this is how they feel it.

After Worf’s death, Ms M searched on the cavy savy groups and web pages and found useful info about how a pneumonia should be addressed and what were the odds for a longer, heavy treatment to be needed. To bad she didn’t do it before…

Now Kirk got hospitalized for a similar issue. His (new) cavy savy vet was not there; she is on site only on Wednesdays. But he was consulted by a generalist that got in contact with the cavy savy vet, explained the situation, decided together the treatment and so on and so forth.

Two days after, he was discharged by the cavy savy vet and Ms M received an explanation about the course of treatment. The vet prescribed a longer period for the antibiotics, mentioned that there is a chance a second course should be needed etc. And, the most important, she said that if he would have again issues breathing, to go back asap.

For Worf it was just a shoulders raising, a condescend smile and “well, if he has issues again we should put him to sleep”.

Life is not fair. At all. But apparently Kirk is luckier than Worf. Or the humans had a wake up call. But still not fare. At all.

And Kirk refuses to stay still for a photo. 🙂 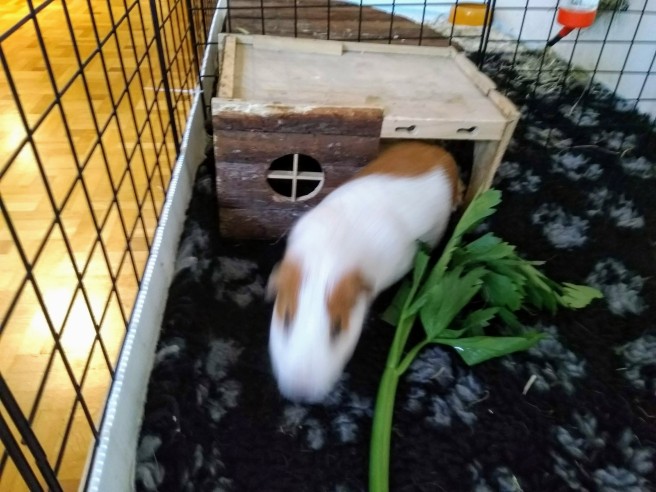 Kirk has troubles breathing so he is in hospital waiting further investigations.

Since yesterday morning when Ms M noticed this she is literally freaking out. Especially that Worf died end March due to a bad managed pneumonia. And that Kirk had a mammary tumor removed some weeks ago and the vet explained it could give metastasis to the lungs.

Unfortunately our new cavy savy vet comes to Brussels once per week, on Wednesdays. And her very good clinic is quite far from the town.

So Kirk was taken to the clinic where she consults in Brussels and the generalist vet will follow the cavy savy instructions in order to investigate.

So far no news and Ms M already cleaned her desk twice. She is almost trembling and in a very bad mood.

The Tales of the Guinea Pigs Gang
Create a free website or blog at WordPress.com.
Loading Comments...