Until recently Ms M was pretty sure she was doing a super job taking care of the piggies. Since all the health issues started, she changed her opinion. And this is what she learned.

First, even if the way you take care of your piggy is fine for a young age, in the long run it may not be enough. To be more specific, she was sure the healthy and balanced diet was enough to cover for the vitamin C. Just that it wasn’t on the long term.

While they were young it was sufficient, but vitamine C deficiency installed quietly and at 5 years old the signs are becoming visible. For Data they become visible at about 4 years old and translated in dental problems like cracked teeth. Kirk has his joints consistency modified forever and it is not confortable anymore to jump up and down on his wood house. Idem for Spock.

So, our conclusion is that although veggies are good, the normal supermarket veggies don’t have enough vitamins anymore. But neither too much unhealthy pesticides or other substances – the small and frail piggies don’t seem to get sick due to chemicals. So safe even for human consumption, but not enough.

Second, and probably the most important: when your vet shrugges his/her shoulders and the only explanation to teeth issues or weird behavior or URI is “they are small animals, it happens and they die”, find another one. Fast! Or you may be left with big regrets.

Third. Even if a piggy never needed a vet until 5 years old, that doesn’t mean he will never need one. So always be prepared. We discovered a mammary tumor when Kirk was almost 5,5. And two months after he got pneumonia.

Fourth. Each piggy is different and they react differently to the same disease. Worf stopped eating when he had pneumonia and we could see he was not happy. Kirk never stopped eating, only at a later stage as a side effect of the anti inflammatory medication.

Also, they react differently to the same medication. No other piggy lost his appetite from Meloxidil, Kirk did. Big time. And lasted few days after we stopped the treatment.

To boost the appetite of a sick piggy and for a healthy, natural probiotic prepare a hay infusion and feed him the liquid by syringe or put it in his water bottle.

Fifth. Carrots, apples and other sweet treats are treats and not daily food, no matter how much your piggy likes them. Kirk started to have white spots on the eyes and they seem to be the effect of too much sugary food. (Their dry food has no sugar added.)

Sixth. Timothy hay all over! And over again. I know the Oxbow one is expensive, but there are some other cheaper options. In the long run, it will help prevent dental issues when the piggies get older. And it helps even if you pass to it later. It is about the fiber quality.

And seventh. When you have more piggies that get older at the same time, at some point you’ll have the feeling that there is always at least one sick piggy in the house. Top up two small children, and the feeling is doubled.

We hope this helps. 🙂 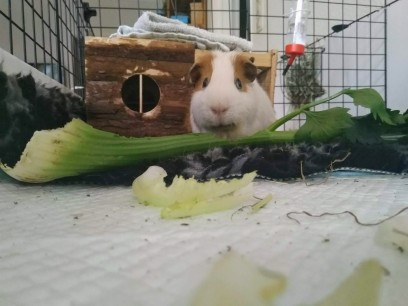 There are two toddlers in the house and one of them was recently weaned. Ms M somehow thought the phase of introducing new veggies to creatures around her to be over. She couldn’t be more wrong…

The Gang is officially on diet. The long story in another post. So carrots, pear, apple, other fruits are out of the question. As they already have some preferences, the humans were left with limited options to build a balanced menu for them.

Broccoli was a “veggie non grata” for the boys, but Ms M remembered that kids need several interactions with a veggie to accept it. So she decided to give it another try for the piggies too.

First time, Kirk was really reluctant. He looked at her with that face saying “are you out of your mind if you think I would even consider eating this thing!”. Spock didn’t even go next to it. Data sniffed it. And we have no idea about Archy, as he was to scared to get out of his wooden house. Probably scared of broccoli.

But they saw there was nothing else for dinner so they took the risk and a bite. And one bite became two and three and look, the broccoli is gone!

Now broccoli is on their weekly menu and they usually eat it. 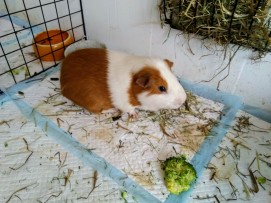